Review: AMO Is Not Your Typical Filipino Teleserye

AMO is getting a publicity push, thanks to those opposing its Netflix debut.

When I read the petition against AMO, it swayed me to finish the series in 3 days, assuming it will get cancelled, haha!

Seriously speaking, I want to bet if the insinuations against it have basis or its just an exercise of free speech. Though some believed a number of criticsms are political in nature because Brillante Ma Mendoza is a known supporter of Philippine President Rodrigo Duterte, and his war on drugs.

Update: Netflix said it’s up to viewers to decide whether to watch AMO or not.

To have a Philippine produced TV series streaming globally on Netflix, is an achievement in itself. And an indication that Filipino film makers and artists are worthy of the global audience. The petition though, is unfortunate, but not necessarily bad. The negative attention, if handled wisely, can be value adding. The curiosity generated by the negative publicity can lead to an intellectual discourse of the issues at hand. 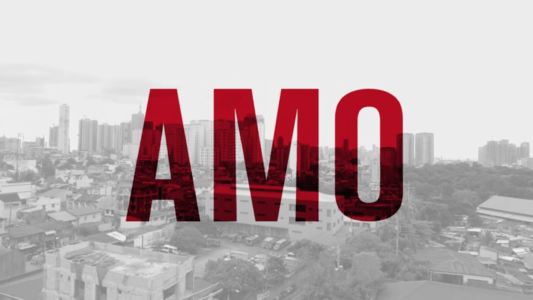 Click to watch the series. Screengrab from the official trailer

This post is one of the rare deviation from the regular niche of this blog. I’m doing so to feed forward a review only after watching all 13 episodes. In this way, I will be fair to readers. Free speech, in my opinion, goes with a grain of responsibility.

In writing this, I’m in no way being insensitive to the families who suffered loss in the Philippine version of drug war. While I’m exercising free speech myself, I’m also one with them in seeking justice.

Having said that, I think…

Brillante Ma Mendoza’s AMO, is not a propaganda piece to make the drug war look good, if not normal. But it seeks to explain the context behind a story. This, however, can drown viewers with too many sub plots.

If AMO is a propaganda tool, its not to justify the drug war

Per my experience, the series evoked two emotions. (1) Compassion for the little girl who is being used in peddling illegal drugs, and (2) anger against the corrupt elements of the PNP (Philippine National Police).

Aside: the drug war ought to have a complimentary program to address the reasons why the poor gets entangled in drug trade. This, on top of the rehabilitation program for drug dependents.

And if there is an existing program but is unknown to the public, then the government is losing badly in the PR (public relations) war.

While AMO is not an endorsement of the drug war, it feature excerpts of President Rody Duterte’s speeches in some episodes.

Likewise, since the MVP group is the financier, it gave the brands associated with PLDT (Philippine Long Distance Telephone Company) and the talents belonging to TV 5 subtle exposure.

AMO is about human nature, substance abuse, corruption and killings

The tv series is a reflection of recent events in the Philippines campaign against illegal drugs trade.

Drugs. The series showed how illegal drugs infiltrated, and affected the different social segments of our community.

It confirmed shabu (methamphetamine hydrochloride) as the popular substance among the poor and party drugs for the rich. Ugly as it may seem, minors were being used in peddling drugs in poor communities, while posh bars are front for high end drugs sought by young people who have money.

AMO will give viewers the birds eye view of the illegal drugs trade in the Philippines.

Killings. The tv series mirrored the realities on the ground- the deaths depicted on the flick occurred from legitimate police operations, police shenanigans, summary execution by vigilantes (or police death squads as claimed by critics of the drug war), and gang revenge.

Corruption. If AMO is a propaganda tool, well it succeeded in making me distrust the Philippine National Police (PNP). If the very group that is tasked to serve and protect us are the bad guys, may God help us.

Cinematography is rather impressive, better than those tv series (or teleseryes) produced by competitor TV channels of TV 5.

However, as an action flick, AMO failed to elicit the ‘at the edge of my seat‘ reaction from me. It is rather slow paced. Action scenes were sporadic, mostly happening at the middle of the series. But these scenes are realistic, a deviation from the usual choreographed moves, which I find good.

On the soft side, the film attempts to explain human natures’ affinity to the dark side. Some for personal survival (or their family), while others because of greed. It’s unsettling to think that the people in your close circle, or people you ought to trust may be living a double life, or can betray you.

Further to the storyline, the focus is shifting from one character to another, albeit without proper transition. Because of this, a sense of loss can be experienced by viewers and may leave many unanswered questions. That probably is intentional, so viewers will look forward to Season 2.

Should you watch AMO?

Why not, the series is better than the usual Filipino teleseryes. And its better to form an opinion in light of criticisms, after watching all 13 episodes. Please note though that AMO was given an R16+ rating because of violence, foul language and a few breast exposures and sex scenes.

Have you seen the TV series, what is your take?

Marriage Story just released on Netflix. Have you had a chance to watch it? It’s starring Scarlett Johansson and Adam Driver. I’ve liked pretty much everything those two have starred in. This was a very sad show though.

A rather fictional mini series like AMO has become a center of political debate. It’s good that Netflix refused to be used by these groups and left the discretion to its viewers.

I can’t help but notice how human rights groups is blatantly accusing sovereign nations undermining due process. Using the same approach that they claim they abhor.