My Take on the RH Bill

Update 4/28/11: A friend since our youth days wrote a comment after this post and explained why they are not in favor of the RH bill. As medical practitioners, they explained using the knowledge of medical science why they disagreed and why they think this can lead to legalizing abortion. The thoughts are enlightening and deserves an explanation/answer from the proponents of RH Bill. 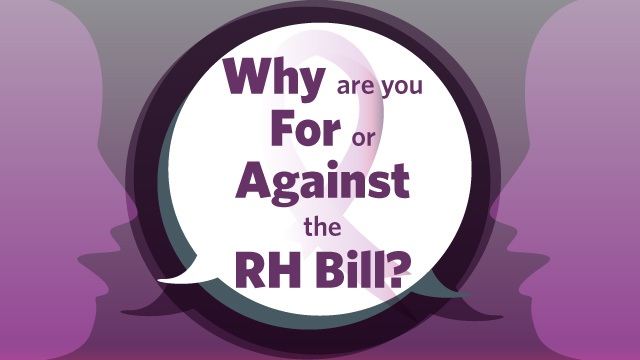 There is an ongoing debate as to whether the RH or RP Bill should be passed or not mainly because of the strong resistance of the Catholic Church. With that, several friends have asked of my stand on the issue, thus, this blog post.

First and foremost, as Christian, I don’t believe in abortion. Life is sacred, therefore, must be respected. This is one of the debatable issues of the bill.

But I believed that a new person is formed the moment spermie meets eggie. Because to believe that a new individual is only formed after some time [some believed that at the early stage of pregnancy, there is “no new person yet”, zygote has not developed or still incomplete to be called human being], then it’s like saying that those born w/ disabilities are also “not a person”. This, in itself, is cruel and injustice.

5 “Before I made you in your mother’s womb, I chose you. Before you were born, I set you apart for a special work. I appointed you as a prophet to the nations.”  Jeremiah 1:5 (NCV)

I am against the termination of life regardless of the stage of pregnancy BUT preventing spermie from meeting eggie for purposes of managing the ideal size of the family commensurate to their ability to provide a decent life is acceptable. The artificial methods that will be promoted under RH bill should be focused on “prevention”.  Any intervention “after” conception, regardless of the stage or timeline, is tantamount to termination of  life.

I talked to a “doctor” friend who is “anti” RH bill because there are allegedly contraceptives being branded as preventive but is actually “abortive”. Since abortion is one of the divisive issues here, I suggest both pros and anti’s of the bill discuss about abortion since both group says they are against it.

Prov 13:22a A good person leaves an inheritance for their children’s children…

Every parent should look at this as their benchmark for responsible parenthood. It may not look achievable given the PH present condition, but if couples will plan the size of  family commensurate to their ability to move closer to the above benchmark, is a good start. The next generation can over achieve their parents accomplishment until future generations can look at the benchmark as an achievable goal.

I have not read the intricacies of the proposed bill, but given the parameters I set, yes I am pro quality life, pro choice to whatever the family planning method would be and to determine the size of family commensurate to ones ability to provide. The state should give access to any method that the couple would chose, but should ensure artificial methods are safe on international standards, preventive [union of eggie and spermie] and will not  intervene on the development of the new person on the mother’s womb. And the state should give equal protection to the health of both the mother and the  unborn child.

I also believed that reproductive health should be taught to everyone, including kids, in an objective, “values centered” and scientific way to make sure young people can make intelligent and responsible choices along the way. I am for “healthy sex life”, it’s good for “married couples”.  Happy couple = happy family.

As a democratic nation, each belief or non belief should be respected in passing a law as sensitive as this. Name calling, disrespect to a person or group or any faith should have no room in the process. Let the law respect all faith, and the state to respect the choice of each citizen, provided this will not violate the constitution and freedom of religion is upheld. The state should guarantee that it will protect life at all cost, both of the mother and the unborn child and will not play god in the life of another person.

Each sector should play their role in upholding the sanctity of life. To live free from hunger and oppression. To empower citizens so they can make responsible choices.

Change starts from within, one person at a time.

Thank you for your thoughts Marvin.

Thank you Kuya Sonnie for graciously allowing me to post my comment. I would gladly guest post on your blog to further educate the readers. Just email me or send me a message po so I can prepare and do research. God bless you po.