On April 02, I wrote an anecdote about setbacks and a person’s passion to achieve his goal. I used Manny Pacquiao, the Philippines’ pride in professional boxing, as an illustration. You can read the article here, or visit 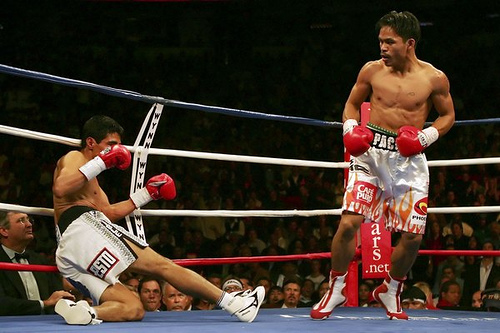 Like every Filipino, I can’t wait to see Manny backed on track to achieve his goal– I almost went to SM Cinema Megamall to watch the fight live via satellite (well, TV. coverage is delayed by two hours). I wouldn’t mind spending extra bucks just to watch the fight as it unfolds… too bad I woke up late. I settled for text message update from friends, A.M. radio coverage and I also noticed my online buddy (khuletz) immediately breaking the news thru her site to announce the victory of Manny Pacquiao via sixth round knock out.

Manny’s life has become a value adding inspiration for Filipinos to likewise be determined in pursuing one’s goal… a goal that may have started as a fantasy…. a dream that was translated to a plan … a plan executed with intensity and passion.

Manny, like many of us, is just an ordinary person– can become arrogant if not careful, can be manipulated, humbled by setbacks, can make a political stand, philanthropic, and like some people, he also would like a shot in showbiz.

What set him aside are qualities, in my opinion, are worth emulating

(1) He knows what he wants to become.
— A person who doesn’t know his purpose may end up as restless
wonderer.

(2) He develops what he knew he had. — He was able to tap into his potential and inner greatness.

(3) He looked at defeat as temporary.

Manny Pacquiao has not achieved yet his goal, but he has done enough to capture the admiration of Filipinos, if not all Asians and the rest of the world. Let him be an inspiration to get us out of a limiting mindset — we tend to look down on our own race and country and in the process, we also failed to appreciate and develop what we have, either as an individual or a community.

As we celebrate the victory of Manny, let us also work for our own victory… LET US CONQUER OUR OWN FEAR.