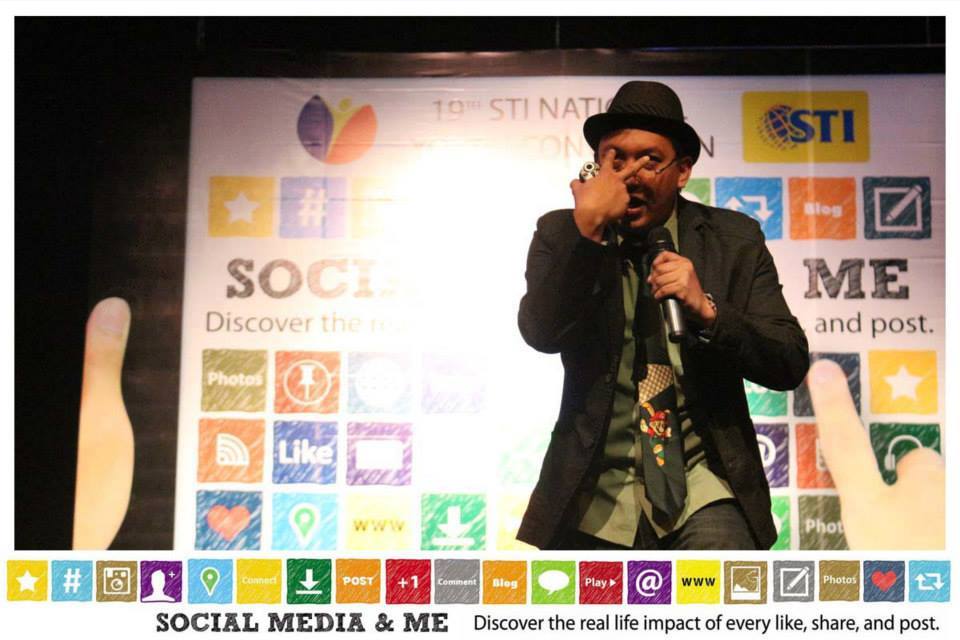 From November last year to March of 2014, we’ve been to Baguio, Cebu, Bacolod, Ilo-ilo, Aliw Theater for 4 days, Gen. Santos, Davao, Cagayan De Oro, Naga and Puerto Princesa to have fun with the youth, at the same time educate them of the skills they need pertaining to the use of social media both inside and outside the campus. To be proactive not only in their studies and future career, but in life in general.

I was asked to give the keynote address about Bullying and Cyber Abuse Prevention.  Presenting before young people is fun, haha. An out of the box approach is a must to convey the importance of online privacy, to be aware of social engineers, be a critical thinker, a.k.a., one step back two steps forward and to be value adding when using social media s tool.

The National Youth Convention is one of STI’s student program being held annually for the last 19 years. It’s original objectives are as follows:

The objectives evolved since then as the school respond to the changing needs of the academic and professional environment, as well as to make it’s students competitive.

It was a fun ride, needless to say. I was impressed with the various programs, both academic and extra curricular, that seek to

In fact, the acquisition of West Negros University and Philippine Women’s University is a proof of their determination to make an impact on the academic community.

The people we worked with are equally impressive with their dedication, hard work and attitude. Mhel, JB, Flor, Jenny, Ysa and Doc Lloyd. I wish you guys success in all your plans and programs. And thank you for the opportunity to be of value to STI.

Here are some of the pics of the recently concluded 19th National Youth Convention courtesy of STI:

Speaking before participants of the sessions at the Metro Manila Leg

The theme for the 19th Edition of STI National Youth Convention

Social media if used skillfully can add value to your brand

Fun time with the participants

"How to handle the bully? The 2nd option is to head-on"

"Most bullies have problem w/ their self-image"

"some bullies learned the aggressive behaviour at home"

"Dare to be different"

"the culture can encourage bullying"

"do unto others what you want them do to you"

"some bullies are motivated by prejudice"

"Make your words sweet because one day you will eat them"

"insecurity is one of the root causes of bullying"

"when technology is used and the 4 elements of bullying is present, it becomes c…

"How to handle the bully? The first step is just to ignore him/her"

The use of cellphone is the common tool in cyberbullying

"some bullies use freedom of expression as license"

Engaging the youth at Cebu Leg

"the value you give to the online community will be your reputation, and the sam…

"if we play with social media and we don’t know what we are doing, chances are w…

"the perceived weakling, is the common victim of bullying"


Some notable historical facts of the NYC. The National Youth Convention was known then as The STI Annual IT Convention