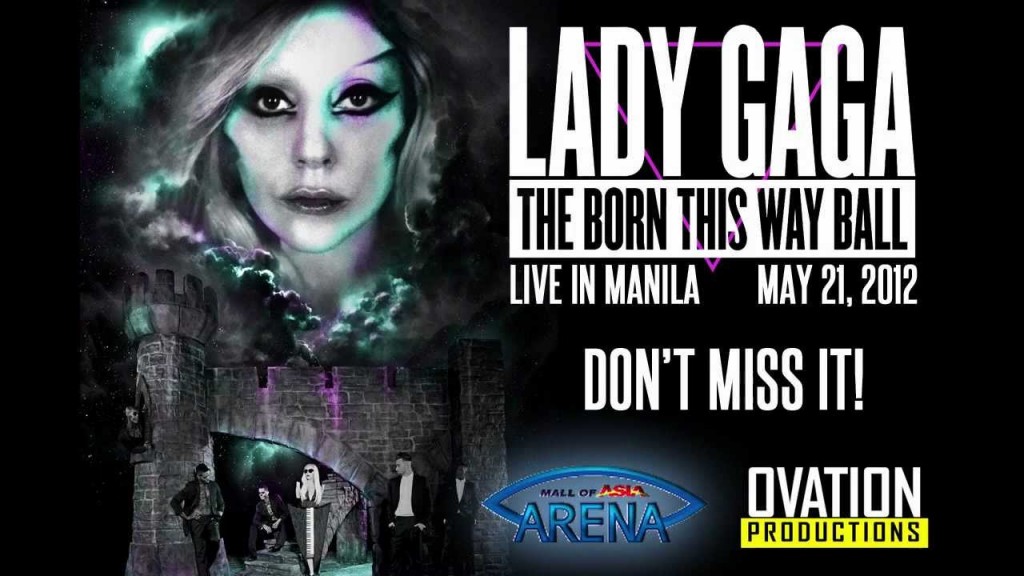 Some social media friends were kinda amazed or surprised that I was in a the controversial “Lady Gaga’s The Born This Way Ball”, ha ha. My age perhaps do not fit the genre? LOLs

Why was I there?

We received 2 complimentary tickets but gave the other one to a former office mate. Wifey’s sked is in conflict with her teaching load. While my kids (15 yr old son & 13 yr. old daughter) with or without the controversy generated, don’t like Lady Gaga. They love pop and rock genre but from the likes of “Kutless” or “Jeremy Camp”. It’s a choice they made w/o our intervention, and I find it cool.

Though I have mixed feeling about it, I decided to attend to understand the prevailing pop culture. For my advocacies to be effective, I thought my generation need to connect to the present one to be relevant.

Even though I am not aware of the lyrics of the songs, the issues thrown at Lady Gaga are not new, these are same issues raised to artists in earlier generations. If you’re old enough, you will remember the “back masking” revelations of the music of Queen and Freddy Mercury back in the late 80’s and early 90’s. The chorus of the song “another one bites the dust”  when played backwards can be heard “I wanna smoke marijuana” . There is another  Queen song (which I forgot) that when played backwards will yield “let’s worship satan” lyrics. The “hotel california” song by Eagles was also attributed to a satanic worship. Likewise,  the lyrics of the songs and styles of Cindy Lauper was questioned too, Madonna was also accused of immorality when she allegedly masturbate in the middle of her concert in Tokyo, Japan.

The music genre, lyrics and the behavior are believed to be directly or indirectly influencing the audience.

Are the allegations true?

Truth is not relative,  there is only one truth. BUT each one can choose what to believe and make this as their truth (at least for the person espousing the thought).

I heard or rather read this thrice from different influential people ,  “listening to Lady Gaga music will not make one a demon neither listening to a Hill Song music will make one an angel”

In watching movies and concerts, just as choosing books to read and games to play, we chose base on our preference.

Our soul respond to music, it can make us aggressive, sad, happy, aroused and so forth. The music is the sugar that makes the lyrics palatable, just like a bitter medicine made sweet so kids can swallow.

For every song, there is an underlying message being preached- it may be a simple expression of the composer’s soul, a reflection of the ills of society, a song of protest, a promotion of an ideal world, etc. The artist, and the style she carries becomes the representation of the music and the song.

One, must recognize that music, lyrics and dance are used for purposes of “worship” too. When we submit our soul to a music, the soul responds by providing the emotion appropriate to the music and the message, and the body gestures (dance) follows. Therefore, it’s not bad to ask, “to whom am I submitting my soul to?”

Now put all these ingredients together, and we have a recipe.

A Recipe for what? Here’s an example, I believed that “music” is one of the reasons why the aspiration for freedom resides in the heart of Filipinos during Marcos era.  So when the other determinants came in, EDSA 1986 happened.

The freedom to choose and express

While it is a fact that too much freedom in the Philippines resulted to abuse and lack of discipline to a few, I like and enjoy the freedom we have here- the freedom to choose our own path, to express our opinion and to convince others to believe in our opinion.

But I also believe that we should exercise this freedom responsibly. The right to express should not trample on the freedom of others. Adequate respect should be accorded to everyone, even though they are on the opposite side of our opinion.

We should also be responsible to the “determinants”  we create because it triggers a reaction.

I believe the best way to move on from the Lady Gaga controversy  is to be responsible to the choices me make as an adult, and to be respectful at all times.

As parents, I think we should lay the right foundation to our kids while they are still young, so they can have the right basis to make their decisions when they are old enough and be responsible for the choices they make.

How was my experience?

I was at the lobby, touring the venue and talking to former officemates who are now managing “The Arena”, half the time. I’m so happy that my employer for 10 years is halfway accomplishing their plans at the Mall of Asia complex.

I think  the time I spent in the concert hall  is enough for me to  appreciate the cool effects- the lights and how the castle transform and so forth. There are kinky moments but generally remained tame. The show is highly creative and entertaining.  A celebration of artistic genius. I cannot comment though, on the lyrics as I have yet to read about it as of this writing.

I don’t like though, the use (or mis-use) of the “Cross” as props. This may be, is for artistic purposes, but I was wondering why the cross was chosen and not the crescent? Or why not use both? (just asking, ha ha). Do not get me wrong, I am not protesting, it is better  to allow others to express themselves and listen intently without prejudging. I also believe that there are better ways of getting the message across.  I am just trying to get answers to the “why’s” up to the 3rd or 4th degree, on different aspects, if that is possible.