My Take On PCOO’s Social Media and Blogger Accreditation Policies

Last February 23, a town hall meeting dubbed #AllMediaPH was held at Bahay Alumni at U.P. Diliman by the Presidential Communications and Operations Office (PCOO), to present the draft social media policy and accreditation guidelines. This accreditation initiative was made possible after TP or “thinking pinoy”, made the request to President Duterte during their (bloggers supportive of the President) meeting with him.

Read:  Are these competencies, credentials, and attibributes needed, prior to accreditation?

In said meeting, the inputs from invited resource persons, live guests and netizens watching the town hall via livestream were sought. Here’s a copy of the draft guidelines for your reference:

The above document contains two things, the draft (1) social media policy and (2) accreditation guidelines. I will discuss my reactions, likewise, in the above order.

The social media policy is mostly for internal use sans item VII C, which also defines the conduct of those who will be accredited, and anyone engaging the government using the PCOO digital assets. Most of the social media policy provisions do not need public input. However, being an advocate of FOI, I laud PCOO for sharing the guidelines publicly and seeking our input.

Let me use as basis my recommendations in an interview with ABS-CBN News a few years back for my inputs. And I quote:

“For example, as a person in government, will what I say affect the image of the agency?” he said. Santos said persons placed in charge of the official Twitter and Facebook accounts of government agencies should undergo training on the proper use of social media and how to protect one’s privacy.

He also suggested a flowchart similar to the one used by the United States Airforce that indicates which comments should be answered and which ones should be ignored. “Not every comment should be dignified with a response,” he said

“Do not make a separate policy that is inconsistent with the original code of conduct set for employees. For example, there might be a policy about wasting company time. If you use Facebook at work all the time, this may be considered a breach of an existing policy,” he said.

He said that while the official communications group in charge of social media may have a different set of policies, the code of ethics should apply to all.

The current draft of the policy, however, is good enough because it defined the digital assets, their purposes, how to use them, who can use them, and the persons responsible. I would like, however, to add and give emphasis on (1) training, (2) guidelines and matrix on how to respond to comments and criticism (3) the role of social media manager and (4) coverage of the policy.

A learning session about the social media policy relative to cyber crime and data privacy law, fake news and trolls, online reputation management and proactive use of social media is important. The matrix that will be developed needs a complimentary workshop to simulate actual scenarios. This will help spur critical thinking whenever the staff will refer to and use the matrix.

Please refer to the table below for my suggestions: 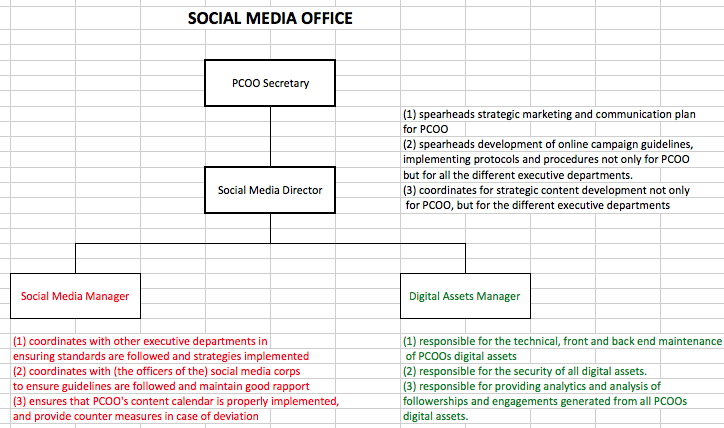 One staff can be assigned to each manager to assist them.

However, I believe it’ll be better if an ASec will be on top not only of social media but everything that involves online, mobile and digital communications, including apps that will be developed in the future. I will help write a new TO (table of organization) should a need for an ASec is established, but in the meantime, the one above will do.

For this initiative to have a more value-adding effect, I am suggesting that the PCOO to serve as the quality coordinator in the area of online public relations, marketing, and strategic communications for the different departments of the executive branch.

Similarly, accreditation will be more attractive to other online influencers if it’ll be extended to the different executive departments. Example, lifestyle, food and travel bloggers will be attracted to DOT initiatives, advocate bloggers to DENR, DepEd, DOLE, finance and business bloggers to DOF and DTI, and so forth.

I have several in mind, but let me start by explaining the random shout-outs I made during the town hall.

First and foremost, PCOOs should not create an impression that they are using online influencers as a soundboard for their pressers. If editorial independence is not compromised, relevant content will be appreciated by the followers of bloggers and social media publishers.

PCOO is within its prerogative to ensure standards are followed. Ideally, however, PCOO should help the soon-to-be accredited bloggers and social media influencers to self-organize and self-regulate. If bloggers and social media publishers cannot or will not self-organize for whatever reasons, they only have themselves to blame because PCOO must fill the void to ensure quality.

Arpee Lazaro, one of the panelists of the town hall also suggested a similar concept. He would like to call the independent group as “council”

Too much focus is on writers, podcasters, and vloggers. Photo bloggers are equally important since captured images when properly used convey a powerful message.

Likewise, from the reactions I heard from the panelists, here are the other suggestions that I would like to give a plus one (+1).

You can read more about Ms. Noemi Dado’s proposal in this article. Another suggestion worth looking at from Noemi is the creation of a committee representing various stakeholders to finalize the draft. Though if serious disagreements arise it can lead to a stalemate if PCOO is not on top of it.

I also agree with Atty. Desini on his framework. Accredited bloggers and social media publishers need not be misconstrued as propagandists, but the training and guidance of PCOO should make them credible sources of information.

Juned Sonido, one of the panelist for the Town Hall, wrote an article to further explain his position. He said there should be no distinction between social media publishers and social media users. The public may perceive the social media users as no different from the “palakpak brigade” of public forums and discourses.

While I agree in most provisions in the draft, there are items that I either disagree or I would require further elaboration.

For instance, on VII C,  I disagree on item 9 (line 314) bec. it is not a requirement for mainstream news websites or journalists, and this will also limit the income opportunity of bloggers. Likewise, Item 3  (line 300) needs to be qualified. While it may seem easily understood, a common understanding or definition of what is offensive, provocative, and inflammatory still needs to be laid down, since we have bloggers who use colorful language as part of their writing style.  I also agree with the concerns raised by TP or Thinking Pinoy on this provisions.

One more thing, I heard ASec. Kris Ablan mentioned the possibility of maintaining two blogs or social media pages. One will be used for PCOO-related content, and the other for personal use. That suggestion was entertained because of item 3 of VII C.  May we remind PCOO that the current draft is focused on the person (blogger and social media publishers) who will be accredited, and not the medium. So if the person will be accredited, the guideline applies regardless of the medium being used.

The work though is to accredit blogs or social media pages, and not the person. That means, only a specific medium is bound to comply w/ the guidelines, and not the person behind it. However, if we will follow this model, PCOO may need to re-write its accreditation criteria. It may also affect the holding of a person accountable for something s/he writes elsewhere since the accredited medium remains compliant.

There are so many things discussed in the town hall that I may not cover, for better appreciation of what transpired at the #AllMediaPH meeting, feel free to read the news articles below:

Suggestions from this blog post may find their way to PCOO for their consideration. Feel free to give your input and add value to the discussion.

Philippines has a very strong blogger network as far as I can understand! So I guess, the govt is trying to lay some rules and regulations on you guys!!! Even USA has something like this called the FTC guidelines! Good to know that they’re giving accreditation to bloggers too like mainstream media. A bit complicated for many of us to understand I guess!!!

Have read about this on TP’s timeline in the past weeks. I find it awesome that the government is recognising Social Media’s influence in these modern times. After all, much of the current administration’s victories can be attributed to those who championed its causes in Social Media. TP, most notably.