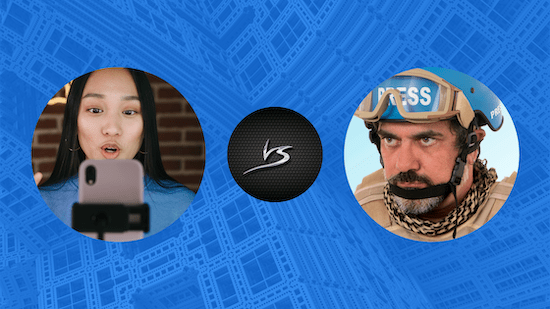 The incoming Marcos Jr. administration plan to accredit vloggers to cover Malacanang has reignited a 6-year-old discourse over bloggers’ presence in the palace.

What’s the difference between bloggers and journalists? Bloggers don’t care about the truth. They’re just after engagement and earnings. Journalists go after the truth and are often killed because of it. Never equate bloggers with journalists. They’re not the same. pic.twitter.com/KBv7evPkJ0

This broad charge leveled against v/bloggers appears to come from a threatened position. It got me thinking about what was causing this renewed aggression?

Dan Wallace-Brewster from Forbes Communication Council gave us a hint when he posed this question, ‘are influencers the new journalists?‘

I believe the current state of social media and 24-hour news has diluted the authority of traditional news and transferred some of it to celebrities. Some types of influence now only require that the personality has the following, likes and dislikes to inspire a reaction, which we refer to professionally as “engagement.”

The ease with which social media allows someone to become an influencer is far from the path that traditional journalists took to earn authority, including years of training under organizations that were trusted stewards of ethics and standards.

Today, both journalists and social media mavens find themselves swimming in the same pond, nourishing their work with advertising that lives off attention — both good and bad.

And where the mainstream media once controlled public narrative, the power has shifted toward purveyors of information on the internet in general, and social media in particular. Most of these people are armed with nothing more than an opinion and a mobile phone but have succeeded in growing their following and reaching audiences to a level that rivals or even surpasses many of their counterparts who are schooled and trained in journalism

Given this landscape, last week’s announcement by Press Secretary-designate Trixie Cruz-Angeles that the incoming administration of President-elect Ferdinand “Bongbong” Marcos Jr. will prioritize the accreditation of “vloggers” understandably raised the hackles of traditional media practitioners who have, in recent years, been finding the professional space rapidly shrinking from under their feet. 
In my opinion, the emergence of “influencist” b/vloggers as alternate sources of information is because of mainstream media themselves. When journos have become biased, they lost credibility.

My thoughts were confirmed by the result of the recent 2022 Digital News Report on Filipinos’ Trust In Mainstream Media. Bloggers’ presence in the halls of power is not a new thing.

It all started when the Duterte administration floated the idea of accrediting bloggers in Malacanang. In fact, accreditation guidelines had already been drafted, but they were not implemented either due to strong opposition or because there are no takers. Though the debate started during the Duterte admin, this idea was said to be originally conceptualized under the PNoy admin but was abandoned because of similar opposition.

Inviting bloggers to cover government events began during the PNoy administration’s early days, but it fizzled out. Under Duterte, engaging bloggers outside the DDS circle flourished until the end of ASEAN 2017.

Some Journalists Are Vloggers Too

V/bloggers are not journalists. However, some journalists v/blog. V/blogging is can be an extension of a person’s professional career, such as a Journalist who blogs, HR pros who blog, Lawyer who blogs, Teacher who blogs, etc.

Likewise, few people also made a lucrative career out of v/blogging, as an influencist.

As with any profession, not all journalists are credible and true to their calling. Similarly, not all bloggers are crap.

People hold journalists to high standards because they go through academic training and adhere to a strict code of ethics. That’s why it’s a biggie when some show bias. As a consequence, their journalistic work is reduced to vivers to feed and sustain echo chambers.

I blog but I am not a political v/blogger and do not claim to be, a journalist. I am an HR Executive and Advocate [for digital safe spaces, human rights in business, and spiritual intelligence] who blogs.

As a blogger, I pay for my own domain, hosting, and other tools to ensure that my blog meets the gold standards of search engines. To the best of my knowledge, I abide by various laws such as privacy, libel, and intellectual property.

I’m not paid to be another person’s mouthpiece. However, I reserve the right to charge for advertisements, brand collaboration, marketing communications, content development, and management. This blog generates leads from businesses in need of corporate training, executive coaching, and human resource consulting.

So, just as not all journalists are good, not all vloggers are crap. It doesn’t take an Einstein to spot a biased journalist.

My issue is that the broad generalizations against v/bloggers are made irresponsibly by people who are supposed to have undergone rigorous academic training and adhere to a strict code of ethics.

Should Vloggers Be Allowed To Cover Government Like Journalists?

Why not? If quality standards and code of ethics are in place, and opposition v/bloggers are included, this can be good for press freedom and democracy.

Likewise, fact-checkers abound, and if these vloggers become purveyors of fake news, we can call them out.

Public perception is the battleground of thought leaders, that is why spin doctors, public relations, and media professionals exist. Government communication strategists will also need vloggers, journalists, and institutional and social media to amplify their message to the public.