🏠 ‣ Articles ‣ #HRinHR ‣ How To’s of Due Process


How To’s of Due Process

What is due process? 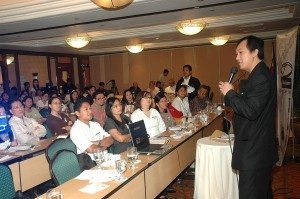 On August 29, 2007, the core of HR Philippines composed of Jing Ureta, Edwin Ebreo, Ricky Gumaru, Jet Nera, Migs Hipolito and myself, plus volunteers who share our advocacy, successfully held the 1st HR Philippines National Conference. And on this day, several firsts also happened– HR Philippines, a Yahoo group without formal structure and budget, held a learning event of this magnitude. If I am not mistaken, this event was also the first conference managed by ARIVA. And guess what, hehe, this event is my baptism of fire in public speaking, my first gig, yay!

The topic assigned to me was due process. And I will be sharing the gist of my talk thru this blog, so peeps who were declined bec. of space limitations, can still follow what transpired in the conference.

Due process is a mechanism meant to balance the rights of employees vis-a-vis management rights and prerogatives.

Employee discipline is a prerogative given to management to address value negating employee behavior.

“Success of industries is the foundation upon which just wages may be paid. There can be no success without efficiency. There can not be efficiency without discipline…” Batangas Transportation Co., et al vs. Bagong Pagkakaisa ng mga employees and Laborers of BTCo., GR No. L-1706 March 10, 1949

However, this prerogative is not absolute because management must also respect employees’ rights.

“The state affords the constitutional blanket of rendering protection to labor but it also protects the right of employers to exercise what are clearly management prerogatives, so long as the exercise is without abuse of discretion.” Pantranco North Express vs. NLRC GR No. 106516, Sept. 21, 1999.

Management rights and prerogatives oftentimes collide with employee rights. To ensure the interest of both sides are taken into account, due process must be observed. Due process have two elements:

Procedural Due Process, on the other hand, provides the steps and requirements on how to go about a certain termination.

For just causes, it’s hearing the side of the employee and evaluating all facts and pieces of evidence vis-a-vis the allegations. This involves the twin notice rule:

An admin hearing is an optional process, but I highly suggest to hold this in cases involving termination.

For authorized causes, it’s the notices that needs to be sent to DOLE and employees 30 days before the effectivity of the termination. A public doctor’s certification is also needed for health reasons. Plus the corresponding separation pay if any, for each case.

Non observance of due process have resulted to unnecessary embarrassment to some companies in the past. Plus cost of litigation and settlement. When due process is not followed, it can result to either illegal dismissal or illegal suspension

Aside from the basic framework we have just discussed, it’s prudent to take into account Supreme Court doctrines relevant to employer and employee relations. Some of which are:

The application of the due process is also a two-way street. Business owners must observe this whenever they will exercise its prerogative and rights. Here are examples:

Likewise, employees must also observe due process if and when they decide to leave the company.

This is rather a complex topic, if you have an interesting experience on this regard, feel to share.

Disclaimer: The articles found on this blog do not constitute legal advice, and engagement/discussion does not signify professional client relationship. Likewise, subsequent court and administrative rulings, or changes to, or repeal of, laws, rules and regulations may have rendered the whole or part of this article inaccurate or obsolete.

Hi, I would like to clarify some parts of the whole process. A coworker of mine allegedly committed a violation which led to some sort of property damage. Before an NTE was issued, he was coerced by the manager to provide an incident report on the event. He initially refused since there was no NTE issued yet but was told that additional violations ( insubordination ) was going to be added if he continued to refuse. he produced and incident report in fear of the consequences. Incidentally, the NTE was largely based on his incident report since the manager did… Read more »

an incident report is not an admission, but a simple report. if the incident resulted in damage or losses to property or has affected the health, safety, and security of another person, or a deviation from the standard procedures, then it will merit an NTE

Good afternoon i just would like to asked regarding the covid 19 pandemic our company decided to put the 20 employees on floating status and the 3 remaining employees will be subject for dismissal. is it legal to terminate effective immediately? or 30 days?

is it authorized or just cause?

30 days notice is standars, even though the remaining 30 days is no work no pay